Friday the 5th, I had the honor of attending a balloon release in memory of yet another child called home to soon. I reached out to his mother when I heard of his passing and we have leaned on each other since. Young Garrett’s birthday is today and I thought I would share in his family and friend’s words just how special he is.

When I pulled up to Sherry’s house the yard was already full of teenagers. I walked into the house to find Sherry and there was a good bit of family and friends all gathered around hustling to make this day perfect. I was glad to see that Sherry was surrounded by people of all ages that wanted to support her. After a long hug with Sherry and a few tears, we started the party!

Everyone gathered in the front yard in a circle. Holding balloons of every color. There were jokes and laughter,. Tears were starting to form. Sherry spoke to the circle of love and then we all released balloons. It was quite a sight. Everyone kept looking up even though the sun was blinding. The balloons seemed to stay in sight longer than usual. It almost seemed as if they were reaching for a plane that was flying over. Quite a sight.

I began going around talking to people and asking them to share with me a story of Garrett. Or something about him. I had never met him and wanted to know who he was. What he was like. The stories and memories were plentiful. One thing that was always said was he loved to make you laugh. Here are some of the memories shared with me:

Kaitlin and Kylie- “We would spend weekends over and have bon fires. He was always doing something dumb to make us laugh. Garrett always made us watch the stupidest movies! And he loved to jump from the tree platform to the trampoline.”

His Granny- “He would come in my room and just jump up with no hands. He would move around like a fish until he got up there. He was just a joy. Kind hearted and always caring about others.”

His PawPaw- “He knew he could always come to me if he was worried about anything and he always did. His driveway is long and we let him drive the old 79 Chevy truck to the end of the driveway in the morning to get on the bus. When he got off the bus he drove it back up the drive. After a huge rain he it stuck and we had to go pull him out. I just miss my buddy.”

Jaron- “Garrett was always calling before I ever got up in the mornings wanting to do something. He would call until I finally got up. We are all bigger boys and when he would leave we would find these his tiny underwear. He was always leaving it at our house.”

Aunt Angie- “He was the most kind hearted boy. There are so many memories that I will treasure for the rest of my life. I especially will miss watching him unwrap Christmas gifts from me.”

Zach- “He was like a brother. Never a dull moment when he was around and always laughter. He always brought people up. He was a person I leaned on.”

Tyler- “He was like the little brother I never had. We always hung out together. I miss the times we would go mud bogging and get the 4 wheelers stuck and have to jump off in the mud. He was always joking, making you laugh. I hope to see him again someday.”

Joy – “I only met him once to take the family pictures but he made an impression that would last forever. He just had this laugh.”

As you can see from the stories that were shared with me, he is truly missed. I regret never getting the chance to meet him. As his mother said at the beginning, “He should be here but I know he is riding in the clouds watching over us.” Happy Birthday Garrett!

Releasing the balloons to heaven 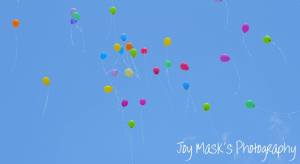 Sherry having a tender moments with Garrett’s friends

Sherry and her oldest son Austin

All that gathered to remember Garrett