Have you noticed after a major or tragic event in your life how things that have always been around you are now standing out more vividly? The same event that happened to you has been happening all around you the whole time.

Since Richie’s accident, I notice every single train. I lived in town for 8 years before his accident. I barely ever noticed the train blaring it’s horn when it went through. After the accident, I heard it every single time. I never noticed them on TV. Now it seems every show I watch has a train somewhere in them. Even stupid Disney Channel has some stupid Choo-Choo song that seems to get stuck in my head and propel me into a horrible day. Trains, trains and more trains!

Richie was life-flighted after his accident and the room he was in was right at the heli-pad. When we were sitting beside his bed, the choppers wold land and I would wonder if the person in them were worse off than Richie. They seemed to never stop coming. One after the other. Jeff has sense told me that it wasn’t as many as I thought but to me, they seemed to constantly land outside the window. Now, every time I hear the familiar sound of a helicopter, I get chills. I don’t even know if it is a medical one or not, I get chills. And I seem to hear them constantly. I remember as a child when I would hear one, I would look up to the sky in amazement to see what they looked like, where they were going. Now, I try to close off my ears and wait for them to just pass over.

Ambulances. The one thing about the ICU waiting room at Atlanta Medical most may not know is that it right above the ambulance entrance for the emergency room. I wonder if they thought about this design flaw after they built it. All night long we heard ambulance after ambulance arrive. If we went outside for fresh air, that was all we would see and hear. Now we have all noticed ambulances in our life. Hard not to with the bright lights and screaming sirens but now….. Now when I hear them I wonder if it is someone’s child in there dying? Is the person in there a mother, father, brother. IS the person in the ambulance there because of an accident, heart attack or just a simple medical issue,. Is there someone rushing to the hospital praying for the best but preparing for the worst? When I hear the scream of the sirens now, I send up a prayer for the person taking the ride and for the family that will follow behind.

I never noticed how many of the TV shows I watch have had a story line on it. I do not ever remember ER having as many stories on it as Grey’s Anatomy. The news seems to featuring a story almost daily. My FaceBook feed always has stories on it. Even my soap opera had a whole storyline for weeks on Alice the maid needing a heart and how she got one. Organ Donation everywhere!

What about shows with car crashes in them? How many times have I watched a movie or show that had some really cool car crash that I thought was out of this world? Now I cannot watch them. The new Furious movie every one is talking about… WILL NOT be seen by me or in y house. Sometimes I make Jeff or Will watch a movie before I do just to see if it has a trigger in it for me.I cannot stomach parts of movies where the victim is laying in the hospital bed with their head bandaged and all the machines. Sometimes if I watch them because I am that invested in my show, I will have nightmares for many nights after and have extremely horrible days

I never noticed any of these things before like I do now. I have to takes breaks from TV and social media. I spend days where I do not go anywhere because of sounds around me. I will purposely go 5 miles out of my way to keep from going near a train track or hospital. We used to got to Jackson all the time to eat. Now I avoid it as much as possible because the train tracks run along side the road we take to get here and the train is always, ALWAYS coming by. I have been told it will get easier in time. I do not see that, but I pray everyday that it does.

The Returned. A&E’s new show that everyone has been raving about. We have been real busy so I have DVR’ed the first four episodes and Tuesday, Jeff and I finally started watching it. It starts with a school bus going over the side of the cliff. You see this young girl on the bus, then you know she is dead. Next scene is the girl walking in the front door of her home telling her Mom not to freak out cause she was late. The Mom just stands there stunned. Years have passed and this precious daughter walks in the door. What is the Mom to think? Has she finally lost it or is this real?

The show goes on to show other returned and the stories of them. It is actually a very good show. I, however, just went to that place that I go to while watching something that sets off a “what if” trigger. What if this happened? What if Richie walked in the door and yelled that he wanted a sandwich? What would I do? What would I say? Would I even be able to speak?

How can a TV show that I know is fake and the events 100% impossible trigger me so badly? Maybe it is just the way my brain is functioning now. Or maybe there is no reason. Let me tell you though, it was a rough night. I went to bed thinking about this show. I guess I thought too much about it because I spent the entire night stuck in the same dream. I would dream that I heard someone in the living room and yelled out, “Who is in there?” Then I heard the voice I crave to hear answer, “It’s me. Are you cooking tonight?” (Yes, he thought I should cook 24/7) This one scene kept playing in my head every time I closed my eyes. And it seemed so real that each time, I jumped out of bed and went to see my boy. Each time, I had to shake off the slumber and realize it was a dream. I would cry a little and then doze back off. This repeated all night until I finally gave up and just laid there. Scared to close my eyes again. Fearing that i would get heartbroken once more.

Laying there fighting sleep I went through a ton of emotions. Sad because this would never be my reality. I would not have an unbelievable miracle happen to me. I will always feel this loss. Always. And forever.

Then I was angry. Angry at the creators of this show and its makers. How dare they make a show like this! Do they not know that I am grieving? Do they not know that I am still hurting? How could they make a show about someone’s child returning from the dead looking perfectly normal and unaware of the events taking place? How dare they! Out of all the scripts in the world they have come through their doors a day, this is the one they picked? Did they not think about me? I am a very loyal A&E fan. How could they do this when I have lost my precious son in a freak accident?

Then I just went to that place I go to where I know that if I don’t stay busy and keep moving that it is going to be an even worse day. So I cut the phone off and went to scrubbing. All the while working out this grief, anger and sadness. Didn’t really help. But the house is clean.

All of this may seem silly. Who could get triggered over the opening scene of a show that drastically? Who could have a horrible 24 hours because of the first 5 minutes of a show? Well, apparently me. I have started noticing that there are a whole lot of triggers lately. I turn off the TV and listen to the radio. This also has triggers. I am a year and 3 months in and I have this trigger phobia now. I guess I am a late bloomer in grief.

For now, I will go and rearrange the closet. Pray the next trigger stays away for a few days. And try to navigate this next stage in grief. Oh and watch episode four of the Returned tonight. After I got over the first 5 minutes, it really is an amazing show! 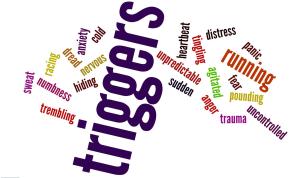